Let us take you back in time and throughout the history of the Temora Hotel and the Top Town Tavern Wyalong in country NSW.

The current building is the last hotel to be constructed in Temora, occupying the site of the old Tattersall’s Hotel which was burned down in a major street fire of 1931. The Hotel never closed after the fire and continued to trade from a remnant left standing on the street front. Plans were drawn up in 1932 and the premises rebuilt in 1933. Before the fire, which burnt the hotel down, the Temora Star Newspaper of 1881 refers to the premises as Curtain’s Temora Hotel.

From 1969 there have been 15 licensees in the hotel, with some remembered publicans being Mr. Ken Kerr, and Alf & Joyce Swaffield from 1955 to 1975. A former WWII fighter pilot, Alf Swaffield came to Temora from Toowoomba via Eugowra in the 1960s. The Swaffields renovated the bar in 1980, lowering the ceiling and moving the bar counter to roughly its current position.

The current façade and décor reflects an art deco feel and could certainly be mistaken for that style, but in fact is a Spanish mission style, reflected in the arched windows and veranda archways as well as the bell towers at either end of the building. The doors on the northernmost Hoskins Street entrance are the original doors from Tattersalls Hotel and parts of the old hotel remain under the current bar area, including concrete steps and pathways leading to the yard and tap room.

Whilst there is more renovations and interior designing to come for the Temora Hotel there is one patron that doesn’t seem to abide by the call of ‘last drinks’ …., A Hotel Ghost?
Several people have reported seeing fleeting glimpses of ‘the hotel’s ghost’ usually in the downstairs hallway and dining room, always wearing a blue dress. She is said to appear as a moving object only seen in peripheral vision, and anyone who reports to have seen her says, if they look directly at her, she disappears from sight.

Seemingly harmless, she is often seen more in the winter months wearing a white shawl over her shoulders, and usually in the early evening, closing the dining room door. 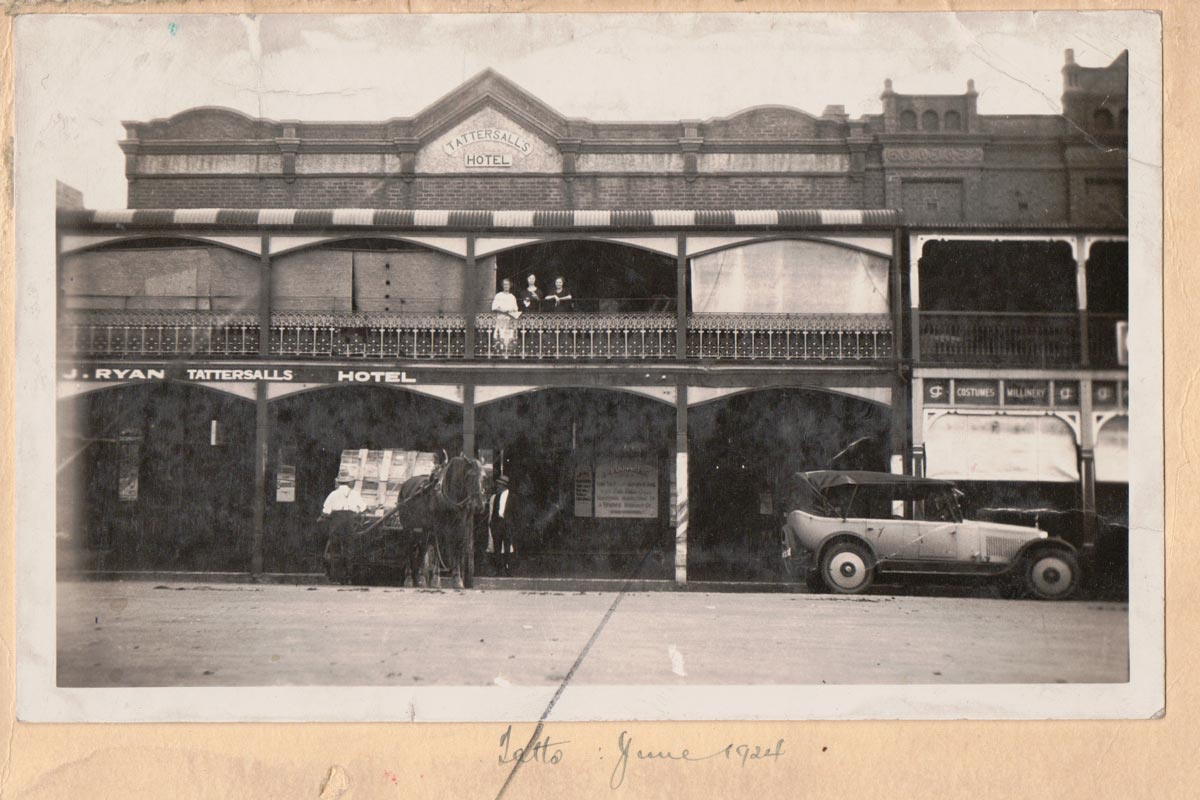 The Tattersalls Hotel, Hoskins street photographed in 1924 the publican at this time was J. Ryan. It started life as all hotels in early Temora, as a single story weatherboard building erected by Alexander J. J. Warby in 1881 next to Warby & Orbell’s sale yards. Warby sold it to Jerry McCulloch soon after it was built and McCulloch ran it for a about a year. From this time it had a succession of licensees including Alexander Stewart in 1899, who had transferred from the Golden Gate in DeBoos Street. In 1907 while Michael Cahill was in charge and tenders for a replacement two storey brick building were advertised. The new hotel was completed the same year. The architect was Alfred Allen of Sydney.

During the 50 years of the Hotel’s existence it had 31 changes of Licensee, the average length stay of each Publican being approximately 18 months, which is the highest of any pub in Temora up till that time.

It was replaced by the Hotel Temora after the fire in 1931 which destroyed all the buildings up to Loftus street.

Top Town Tavern, formally known as the Queensland Hotel in Wyalong, is the only remaining licensed premises in Wyalong that has historic and aesthetic significance.

Mr. D Prince was the first licensee of the Queensland Hotel in 1894. In 1895 Mr. William and Ellen Wheeler purchased the hotel and for seventy or so years the hotel was in the Wheeler family, who owned and operated this venue, selling in 1966.

The Children of the late Mr & Mrs Wheeler were the trustee of the hotel, which held the freehold and licence for a number of years. In 1961 they leased the hotel to Barney and Betty Kennedy who manage this venue until 1966, when the hotel was sold to Bert and Audrey Fletcher. The Fletchers owned and operated this hotel until 1971, when Brian and Wendy Lochrin took over the leasehold. They ran this for a year, up until 1972 when Robert and Pauline Randell took over for 4 years.

Since then the venue has had a number of licensee and owners.

Mr & Mrs Wheeler came to Australia on their honeymoon in 1888. Mrs Ellen Wheeler came from Launceston, Cornwell England and Mr Wheeler from Somerset England. They lived in Melbourne for some time, where Mr Wheeler conducted a hotel keeping business for several years. They came to make residence in Wyalong after the goldfield’s broke out. Mr wheeler was interested in gold mining for a time, after which he purchased the Queensland Hotel in 1895. He conducted this hotel up until his death in 1911, when Mrs Wheeler took over the business.

Mr Wheeler was a popular man, an outstanding character. He was ardent and loyal britisher – so much so that he was popularly known as “British Bill”. He was the captain of the rifle club and and of the Militia for several years. Patriotism was strongly ingrained in the family. The eldest son, Henty was among the first to enlist from Wyalong at the outbreak of the Great War and was unfortunately killed at Lone Pine in August 1915. Their second son jack, enlisted in the AIF before he attained his majority.

Mr Wheeler passed away suddenly aged 47 years in Melbourne 1911. Mr & Mrs Wheeler went to Melbourne to meet their son, Henty for his arrival home with the Australian Cadets. Mr Wheeler fell backwards, striking his head on the platform of Spencer street station. He was taken to Melbourne Hospital where doctors had no cause for alarm, and Mrs Wheeler went to meet their son. On arrival back to the hospital, Mr Wheeler had passed away.

Mrs Ellen Wheeler passed away at the age of 59, in December 1923. Mrs Wheeler was unwell for several weeks before her passing at Mavville Private Hospital, Wyalong. Both in business and private life, Mrs Wheeler gained the highest respect and esteem for the community and friends. Her hotel was one of the best conducted businesses of a kind that one could find. Her funeral took place on a Sunday afternoon and was one of the largest that had been witnessed.

They had 5 children, Henty (killed in action, 1915), Jack of Sydney, George of Wyalong and Florence and Ethel of Wyalong.

Their children George, Jack, Florence and Ethel Wheeler were the trustees of the late Ellen & William Wheeler. They held the freehold and managed the hotel until they sold the venue in 1966.

Lance Corporal W H Wheeler – “Henty” was Mr & Mrs eldest son, born in Melbourne and lived in Wyalong with his parents for 20 odd years. He was one of the first volunteers to enlist in the Great War. He held the rank of signaller in the volunteer cadets and visited England for the coronation. Henty was killed in Action between the 7th and 14th of August 1915, he was 22 years of age.

Jack Wheeler was born and raised in Wyalong and assisted with running the Queensland Hotel before going to Sydney to complete his education. He then entered the AIF (Australian Imperial Force) and was an officer of that institution up until his death. He was a man of marked ability and exemplary character. Jack was ill 3 months prior to his death in July 1933, he was 34 years of age.

George H Wheeler and his wife, Lou were the licensee of the Queensland Hotel. They purchased the venue from the family after running it for a number of years. All the family, including Florence and Ethel contributed to the operations of the venue.